Fewer but faster printers are deployed in the fight to reduce the university's paper consumption.

These days it’s not so bad. The most recent figures showed an annual consumption of 14 million sheets, but this is still a lot in a time when the vast majority of workflows that once required the use of paper can now be managed on a computer.

The Executive Board has therefore decided to introduce measures for reducing consumption even further and ensuring greater sustainability in day-to-day work. 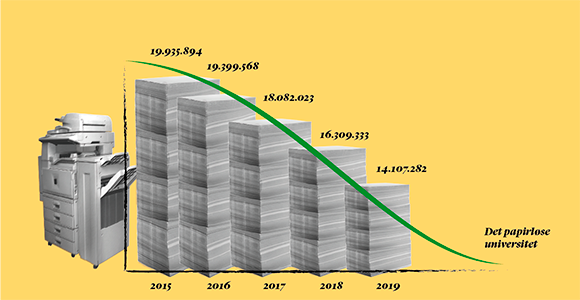 “The vision is to have a paperless university. We would like to change the mindset at SDU, so that everyone asks himself or herself: ‘Is it really necessary to print this?’ before they press ‘print’,” says University Director Thomas Buchvald Vind.

“There are certainly some administrative procedures that can be improved, not least in connection with the digitisation process we are currently in the middle of,” he says.

In order to encourage both staff and students to hold back on printing, there will be more space between printers in the future.

The new machines are faster

At present, the university has a total of 276 multifunction printers located in Esbjerg, Kolding, Copenhagen, Odense, Slagelse and Sønderborg. 125 new printers will replace these in February.

We have reviewed all of the cards and categorised the university's printers by how many prints they produce in a year. “For example, if there is an area with 2-3 printers, which independently account for less than 50,000 prints a year, we will remove them and replace them with one big, good-looking machine,” says Bjarne Kay, head of section at Technical Service.

He is aware of the fact that not everyone will be happy with having to go further to get to the nearest printer. It has therefore also been important to purchase machines that are much faster than the old ones to avoid queuing in front of the printer.

“And the print order will only be deleted after 24 hours, which also means that there is plenty of time for the user to collect his or her prints,” says Bjarne Kay.

Interest in the old printers

The cost for replacing the university's seven-year-old printers with new printers is DKK 3.9 million.

“The old printers will not be scrapped. We have already received an enquiry from a company that is interested in purchasing them. And otherwise, it is the supplier’s obligation to handle them,” says Bjarne Kay.

Back to Our SDGs